ADHD is a neurodevelopmental disorder that impacts the parts of the brain that help us plan, focus on, and execute tasks. It affects how you pay attention, sit still, and control your behavior. It is the most common neurodevelopmental disorder in childhood.i The symptoms are usually first noticed and diagnosed in children but it is something that often continues into adulthood. Some adults that have ADHD have never been diagnosed with it and do not know they have it.


According to a national 2016 parent survey, the estimated number of children that have ever been diagnosed with ADHD is 6.1 million (9.4%).ii If you think that you or your child has ADHD, you are not alone! It is common. You can find so many articles and resources that can teach you about ADHD and there are lots of treatment options available to help you if you are struggling… including us here at KoolMinds!

What is a Neurodevelopmental disorder? 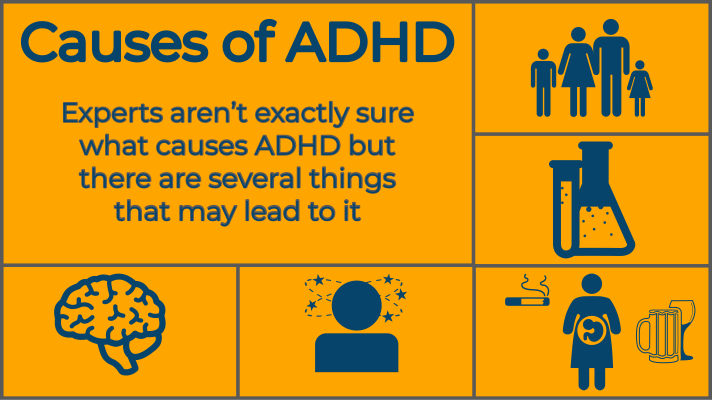 A neurodevelopmental disorder is any condition that affects how your brain functions.

It is so interesting to read about the connections between ADHD and the brain. Here are a few articles that are fascinating if you want to learn more:

Experts aren’t exactly sure what causes ADHD however they have found that there are several things that may lead to it, including:
Check out these articles to learn more about the causes of ADHD:

In order to make ADHD diagnoses more consistent, the American Psychiatric Association grouped the condition into three categories, or types of ADHD.  These categories include: primarily hyperactivity-impulsive, primarily inattentive, and a combination of both. The DSM-5 lists the diagnostic criteria for ADHD and include these symptoms listed.iii

People with primarily hyperactive-impulsive ADHD act “as if driven by a motor” with little impulse control. Symptoms of this type include:

People with primarily inattentive ADHD have difficulty with focusing, finishing tasks, and following instructions. Symptoms of this type include:

This is the most common type of ADHD. People with this type of ADHD display both inattentive and hyperactive symptoms. These symptoms often include an inability to pay attention, a tendency toward impulsiveness, and above-normal levels of activity and energy.

Here is a great video from Understood about ADHD.
In this video, Thomas E. Brown, PhD, discusses
ADHD symptoms and common causes of ADHD.

If you think that you or your child has ADHD, click the link below to learn more about how KoolMinds can help!

[i] CDC- Centers for Disease Control and Prevention. Accessed 4/7/2021 “What is ADHD.” https://www.cdc.gov/ncbddd/adhd/facts.html